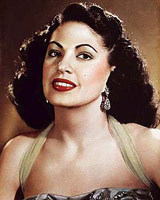 This name is given to the dog in honor of Consuelo Velazquez.

Consuelo Velazquez (1916?-January 22, 2005), was a Mexican songwriter. According to her obituary she was 88 years old. Most music resources, however, list her birth date as August 29, 1924 in Ciudad Guzman, Jalisco State, Mexico.

Velazquez was the songwriter and lyricist of many Latin standard songs, such as Amar y vivir, Verdad amarga, Franqueza, Que seas feliz, Cachito, Enamorada and, most notably, of the enduring 1940s-era hit Besame mucho (Kiss me Much).

Velazquez, who is said to have begun playing the piano at the age of four, started her professional career as a classical music concert pianist, performing at Palacio de Bellas Artes and XEQ Radio, but later became a singer and recording artist. According to Velazquez herself, she was strongly influenced by Spanish composer Enrique Granados. She composed the romantic ballad Besame mucho in 1941, which was soon recorded by artists around the globe, making it an international hit.

If you want to listen to  the song

"Besame mucho (Kiss me Much)",  press this button ♫